Lucario is a Fighting/Steel-type classified as an Aura Pokémon. This Pokemon evolves from Riolu and has the potential to Mega Evolve into Mega Lucario. Lucario was one of the first fighters confirmed to be in the game along with Machamp and was introduced to Pokkén Tournament upon it's initial release in Japan on arcade.

Lucario is one of the most balanced characters in the game. It has the third highest HP count in the game (600, the same as Blaziken and Charizard) and has a decent ranged and melee game. It attacks opponents with Aura Sphere and assaults enemies with Bone Rush when at close-quarters. It also has the ability to pierce counters and break guards. It also borrows a lot of moves from Lars Alexandersson, one of the main characters of the Tekken franchise.

Has significantly higher jump than most playable Pokémon.

Machamp and Lucario standing off. 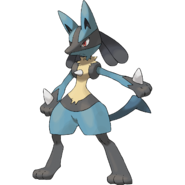 Lucario in the Pokemon series.
Add a photo to this gallery

Retrieved from "https://pokken.fandom.com/wiki/Lucario?oldid=6582"
Community content is available under CC-BY-SA unless otherwise noted.