Shadow Mewtwo is the supposed alternate form of Mewtwo in the game, and serves as the main antagonist for most of the story mode of Pokkén Tournament.

Being a Technical fighter, Shadow Mewtwo is an extremely potent Burst fighter that has lots of combo options and setups for high damage racking. It's many forms of deriviations from a single one of its Pokemon Moves gives it a wide range of choices when acting and allow it to battle with unpredictability when using variation moves like Psywave and Reflect. It also has one of the only self-heal moves in the entire game, the only other ones being Sceptile's backwards ranged attack and Darkrai's Phanthoms, though the latter requires some beforehand actions in order to work. In addition, having a 100CC burst volume, 2 phase shifts can usually fill up the Synergy Gauge and allow it to use one of the most powerful burst attacks in the game, Dark Nova. It's hitbox is one of the largest in Pokkén Tournament, and it's damage output is really only outshined by Blaziken's Gatling Flame Kick.

Although, Shadow Mewtwo also has some serious flaws on its side too, the most notable of which is his squishiness. Shadow Mewtwo has the lowest HP count in the game, 480. In addition, all of his Pokémon Moves except for Recover drain Shadow Mewtwo's health, making counters and blocks vitally important when using it. It can get so bad that sometimes Shadow Mewtwo has to rely on Burst Activation to restore lost health. A lot of his X attacks are easily punishable as well, and this literally makes Shadow Mewtwo a glass cannon of sorts.

Similar to Mewtwo, Shadow Mewtwo also drains resources while attacking with Pokemon Moves; however, instead of draining the user's Synergy Gauge, it drains the user's HP instead. Shadow Mewtwo already has the lowest HP in the game and has significant ending lag on most of its strong attacks, so this makes Shadow Mewtwo incredibly vulnerable in most instances. However, this damage can only reduce the user's HP to 1. It is also one of the only Pokemon in the game to have an effective healing move, Recover (Hold A).

Recover is one of Shadow Mewtwo's Pokemon Moves. It is activated by holding A and then releasing once the user has a charged aura around it. It is one of the only moves in the game to heal HP without draining the opponent's, and this is direly needed for Shadow Mewtwo as it has one of the lowest HP counts in the game. Like all other charging moves, as long as the button is held down it will still record the charge timer, regardless if you are attacking or in a freeze state. This makes it useful as an after-counter move in duel phase or while the opponent is knocked down.

Miracle Eye is another one of Shadow Mewtwo's Pokemon Moves, being a defining feature of it. It is activated by pressing Back + A in either duel phase or field phase. It has the capability of enhancing and/or "reactivating" particular moves in battle, most notably the electric balls of Shadow Mewtwo's Ranged Attack, the boomerangs of the Side Ranged Attack, or the pillars of energy used in the Backwards Ranged Attack (FP) or the Forwards Weak Attack (DP). The interesting property of Miracle Eye is that it is capable of reactivating the attacks even after they have made contact with the opponent and dissipated. It has various effects on different moves.

When a move is reactivated, it simply means that even after the move has hit, it will still come back and hit twice, if Miracle Eye is used in a certain amount of time after the original attack.

Aesthetically, Shadow Mewtwo will transform into a Shadow Mewtwo version of the usual Mega Mewtwo X, with a seemingly broader posture and a more muscular appearance. However, orange shards of the shadow synergy stone will now shove up all across Shadow Mewtwo's body, and orange veins will course along the body, arms and legs. Purple energy and black accents now surround Shadow Mewtwo, and the outline of Shadow Mewtwo will occasionally pulse a cyan color. In addition, many of its standard attacks have altered physics and it's Grab attacks are both visually altered. Many now involve Shadow Mewtwo stretching its limbs to attack.

Dark Nova is one of the most potent burst attacks in the game. It's a Normal burst attack, meaning that it bypasses counters and grabs, and can be blocked. The hitbox is in a dome shape that expands at maximum size to eventually have a diameter similar to the radius of Neos City. Anything that is caught in this dome experiences upwards knockback for about 0.9-2.5 seconds. If, however, the enemy is knocked out of the radius of the dome during the startup phase of the burst attack, Dark Nova is cancelled and the attack cutscenes do not occur. If all hits connect, however, the main attack cutscene proceeds.

The startup involves Shadow Mewtwo crouching down and seemingly absorbing dark energy from its nearby environment, then expelling it all in a dome-storm of dark energy. Similar to Darkrai's burst attack, it is able to hit both airborne and grounded opponents, however, due to the upwards knockback sequence airborne opponents may be knocked out of the blast range before the main attack animation commences. Akin to Machamp's Dynamic Fury, the combo counter greatly exceeds expectations for the combo counter during and after Dark Nova, reaching 9999 hits after the attack ends.

Some Research might need to be done on how Shadow Mewtwo's Dark Nova ranks in with the other Burst attacks in the game, due to debates about the current damage output of various other Burst attacks such as Blaziken's Gatling Flame Kicks (C. 258) and Darkrai's Infinite Eclipse/Machamp's Dynamic Fury (C. 252), compared to Dark Nova's current damage output of 268 at point blank in Duel Phase.

This is Shadow Mewtwo's entire moveset. Joystick inputs are marked using an asterisk (*). Joy inputs in duel phase depend on what direction the player is facing. 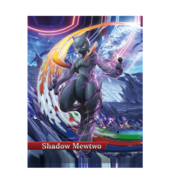 Shadow Mewtwo's amiibo card.
Add a photo to this gallery

Retrieved from "https://pokken.fandom.com/wiki/Shadow_Mewtwo?oldid=6596"
Community content is available under CC-BY-SA unless otherwise noted.